MJ and I have been looking for an appropriate and mutually acceptable building site for the last month or so; we each have certain requirements.  Neither of us wants much of a lawn to deal with, so something wooded sounds good.  She wants to be close to emergency services.  I don't want to be too close to a lot of people.  Since we want the sun to help us with heating and energy, a nice southern exposure is a requirement.

We've been making weekend trips to potential sites found in real estate listings for nearby counties. Need the right combination of location, price, and features.  A couple of weeks ago we found a site that seemed to fit most of the criteria and started to investigate a little further.  Something that quickly came to the fore (which I hadn't even considered), was what to do with our sewage.  Most of the sites we've looked at, this one no exception, are somewhat rural.  No city sewer.  So we would need a septic system of some sort.  This particular site that we like was certified to have a lagoon septic system.  It isn't particularly appealing.  Some of the local residents that we talked with said they've had similar systems for years without issues, and there is no sewer bill.  They "love them".  We don't really have the same affection for them, so are investigating the options.

I am just a little surprised to learn that the disposal of my human excrement has become such an issue to site procurement.  Live and learn.
Posted by Rainer at 4:32 PM No comments:

I'm starting to get the hang of configuring this blog site, so let's talk a little bit about The Quest.

Before we met, both MJ and I had interest in reducing our respective energy bills and fossil fuel dependencies:  Mary Jean investigated geo-thermal heating and invested in wind and solar energy companies, and I wanted to dig a hole into a hill and insulate with bales of hay.  Those are about the same, right?  This intersection of our common interests has fueled our desire to start planning to create our dream house in the country, a retreat with minimal energy grid requirements.  Our current utility bills are probably also a contributing factor.

These thoughts were somewhat ethereal and long-range until probably last spring when we went on the Woodford County Women's Club Garden Tour and saw a home that we both were willing to move into (see link to Tate Hill Jacobs architects).  The only possible drawbacks were the million dollar plus price tag and the owner's comment that they would probably be ready to sell in about ten years. 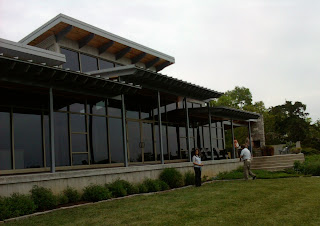 Since then we have perused various websites and magazines looking for ideas and possibilities, but of late we've decided to actually pursue the dream and are trying to make the nebulous have a chance to become real (and by "we've decided" I mean, of course, that she told me to stop talking about it and let's do something).  So begins the journey.
Posted by Rainer at 4:33 PM No comments:

So, MJ and I are attempting to move to, and thus probably build, a low-maintenance, low cost-to-run home in Kentucky that is largely green, low carbon footprint, net zero energy, and various other cool sounding and earth-friendly things that will make us good citizens of the world, and coincidentally make our life more enjoyable and less costly (after the initial investment).  So we thought maybe we'd make a blog about it.  Today's initial attempt is to figure out how this blogging thing works...
Posted by Rainer at 8:29 PM No comments: